It is Always Darkest Before the Dawn

The longest bull market in history came to an end in a violent fashion. The S&P 500 has declined 26.64% from its peak on February 19, the fastest 20% drop from peak levels in history. Yesterday’s decline was the steepest sell-off since the 1987 Crash and the 5th largest single day decline in history. What we are witnessing is pure panic. The current price action, market disruptions, and cross-asset volatility have been matched by only a few other times in history.

Yesterday was historic, with broad declines across asset classes. The Dow Jones Industrial Average fell 10% and the S&P 500 fell 9.5%. Breadth was extremely weak with just a single stock, Occidental Petroleum (OXY), in the S&P 500 finishing higher. Every other stock in the S&P 500 fell at least 1% with the cruise line stocks hit the hardest, declining over 30%.

One of the most important things to remember is that the stock market is forward looking. What that means in practice is that the market will typically bottom before the worst of the news is out. That is why the market peaks before a recession starts and bottoms roughly about two-thirds of the way through the recession.

It’s not just equities that are under pressure. Credit markets have also fallen apart as liquidity has dried up. The dislocation in fixed income has been extreme, and yesterday was one of the worst days ever in the credit markets. Credit spreads have blown out across both high yield and investment grade bonds. In addition, even though Treasury yields have plummeted to new lows, municipal bonds have not followed suit. There is stress across all fixed income sectors.

The Federal Reserve did step in and took aggressive steps to ease what it called “temporary disruptions” in Treasuries, flooding the market with liquidity and widening its purchases of U.S. government securities in a measure that recalls the quantitative easing it used during the financial crisis. The Fed offered $500 billion in a three-month repo operation and said it would repeat it on Friday, along with another $500 billion in one-month repos, and would continue on a weekly basis for the rest of the month.

The Fed also said that rather than just buying $60 billion of T-Bills a month as planned, it will extend those purchases across the curve. This adds a massive amount of liquidity to financial markets that will also expand the Fed’s balance sheet for the duration of the operations. Add it all up and by the end of the month and, the Fed will add over $5 trillion of liquidity into the markets. The Fed is doing “whatever it takes” to backstop the overnight funding markets. In our opinion, this is a precursor to more monetary policy actions in the coming days.

The Fed already cut rates by 50 bps. This action was necessary because the Fed funds rate was significantly below the 2-year treasury rate. We don’t think this is a one and done event. Currently, the 2-year Treasury yield is 46 bps. The Fed funds target rate is 1.0%-1.25%. The market is still pricing in pricing in 75 bps of additional cuts by next week’s FOMC meeting.

Lower rates could help stabilize the markets, but they are unlikely to be effective in significantly aiding the economy. Lower rates won’t change spending patterns dramatically, other than maybe spur a little more refinancing activity. Even though the U.S. has more room to cut rates than other countries’ central banks, balance sheet expansion is much more effective in stimulus. The Fed’s balance sheet is now going to balloon given the repo operations announced yesterday.

Now it’s time for policymakers to get their act together. Monetary policy alone is not enough, and a coordinated fiscal policy is needed to stem the economic deterioration from the coronavirus response. President Trump’s address on the government’s coronavirus response did not inspire confidence. So far it seems as though it is politics as usual in D.C., and Congress has been unwilling to do much of anything. However, the market and economic deterioration have escalated to the point that a large fiscal plan seems inevitable, and likely over the next week.

The market’s decline has left it in a very vulnerable position and at some historic extremes rarely seen in the past. Sentiment levels have reached extremes. For example, the CBOE volatility Index (VIX) closed yesterday at 75.47. That was only the 6th time it has closed above 70 since 1990. It has only closed above 80 twice. All of these times were at or near major market bottoms. Besides this week, the last time the VIX closed above 50 was during the Credit Crisis. Those were some very dark times in the market and were also some pretty darn good times to invest.

While there are uncertainties as to how the coronavirus plays out, we do not believe economic conditions today are anywhere near as dire as they were in 2008. Today we are faced with an economic slowdown— 2008 went well beyond that as the entire financial system was on the brink of collapse. In our opinion, with the rapid and dramatic sell-off of the last few weeks, markets are pricing in far more risk than exists today. 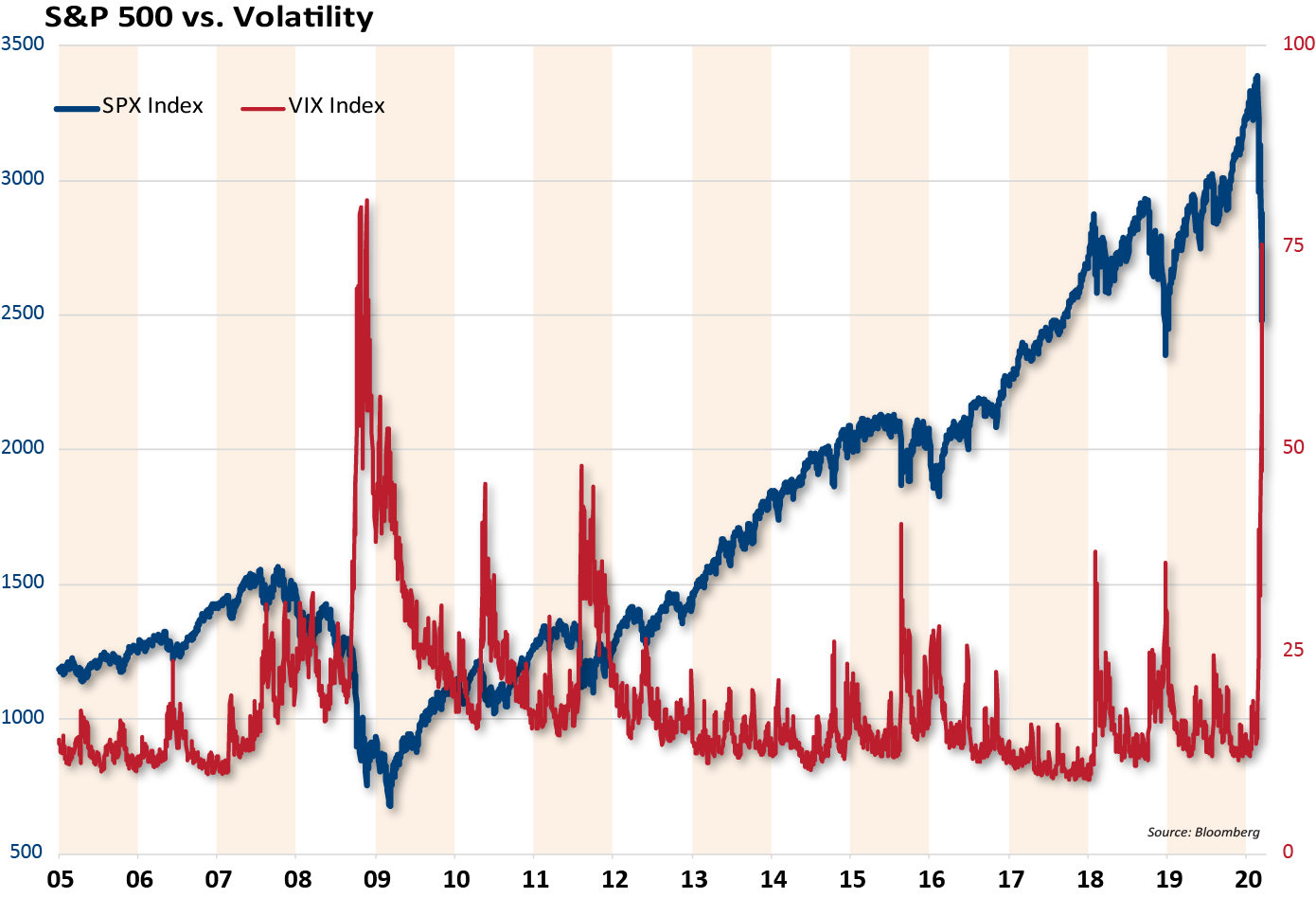 Volatility begets volatility, and we have certainly seen than over the past couple weeks. According to Ned Davis Research, we won’t likely see a return to low volatility any time soon. After the 18 previous cases in which the VIX has first broken above 30, a mean of 42 market days have passed before the VIX has finally dropped below 30 and stayed below that level. The historical tendency is for volatility to remain elevated over the three-month period following spikes above 30.

The Ned Davis Research Daily Trading Sentiment Composite also closed at one of its most extreme readings that have occurred near some of the most washed out markets. 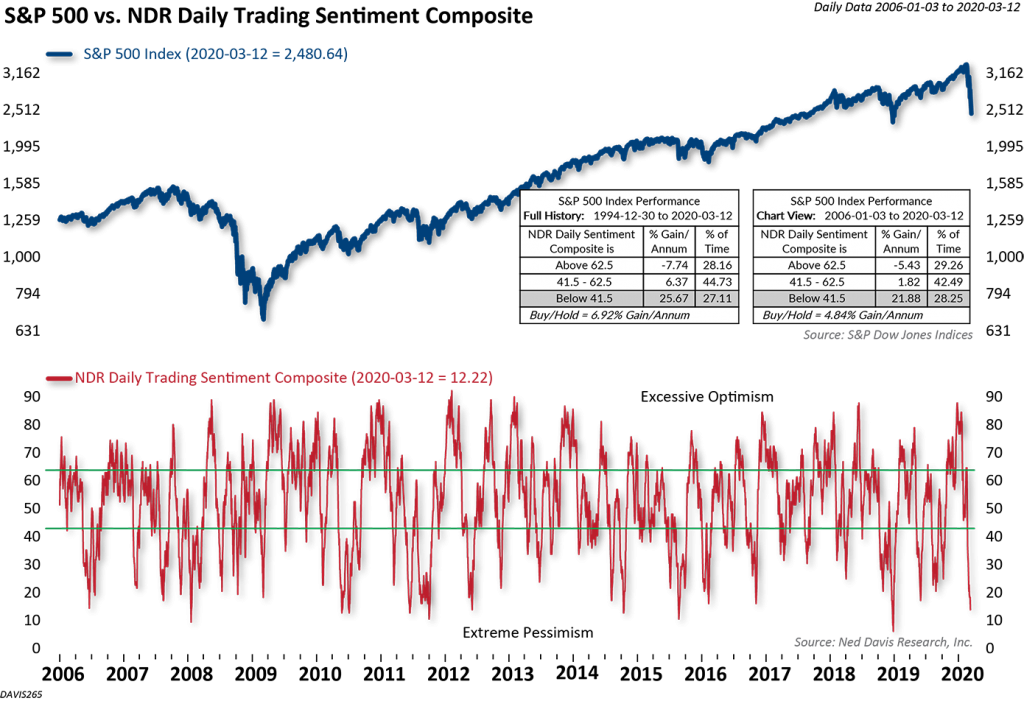 In addition, in Thursday’s session, more than 77% of stocks that traded on the NYSE hit 52-week lows. Only October 10, 2008 exceeded this figure, and just barely. Since 1965, every time more than 60% of stocks hit 52-week lows, the S&P 500 rallied over the next 1-2 months. A year later, the S&P 500 averaged a return of more than 32%. Also, in one of the very few times in history, more than 95% of NYSE volume was in stocks that declined on the day and on consecutive sessions. This has only happened three other times, each coinciding with a final selling climax.

The market is so severely oversold that only 4.95% of the S&P 500 names are trading above their 200-day moving averages. According to Renaissance Macro Research, there have only been 10 clusters of these deep of oversold conditions since the S&P 500’s start in 1957, with the three-month forward returns averaging 9.1%. Finally, on the technical side, Put/Call ratios have spiked as market participants rush to hedge positions. Positioning has turned defensive, which is a net positive for the market from a contrarian perspective. 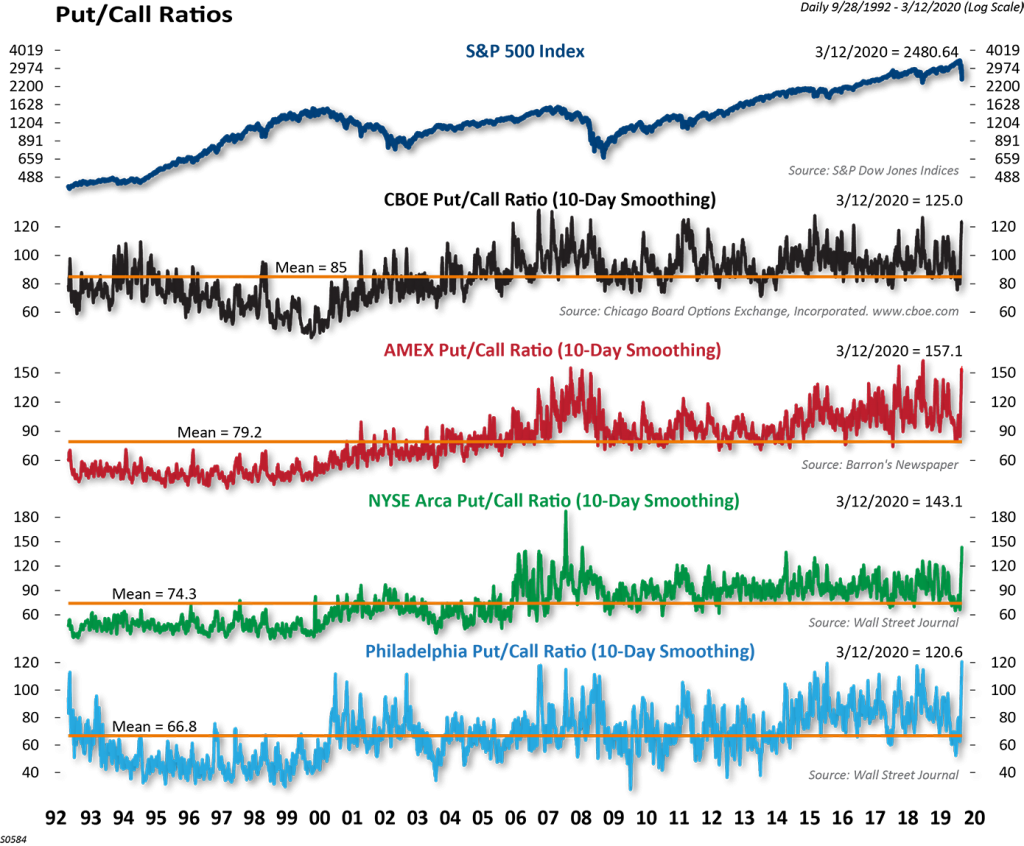 None of this means that the market cannot continue to head lower. It absolutely can. But we are approaching levels and historic anomalies that normally lead to bottoming processes. There has been a lot of damage done to the technical condition of the market in a very short period. It will take time to repair that damage and that normally means a bottom, rally, and re-test sequence.

We know that schools are closing, sports have been suspended, and cities are declaring a state of emergencies. The news is going to get worse, we will see terrible economic numbers, and earnings will come under pressure. None of that is a surprise at this point. The government response to the coronavirus is extremely damaging to the economy.

We are ratcheting down our GDP forecast for 2020. The Atlanta Fed’s GDP Now is still forecasting 3% growth in the first quarter (we think that is too optimistic) and first quarter GDP should be in the 2% range. However, we will likely see a considerable impact on Q2 growth given the steps taken to limit the spread of the virus, with a rebound in the second half of the year.

Second quarter growth is now likely to be in the -1.0% range with a modest pickup in the third quarter, and then a strong 3.5% growth rate in the fourth quarter. Depending upon the shape of the economic weakness and timing of the rebound, we are likely to see GDP growth of 1.5% in 2020. We believe 2020 will be the year of the virus and 2021 will be the year of the rebound. Assuming this is contained over the coming quarters, 2021 would be a rebound year as demand and supply chains come back online.

Bad news is getting priced into the market as well as many other unknowns such as how quickly virus cases are going to surge, what the morality rate is going to be, and what the economic impact will be. Those who have been in this business for a long time have stared down Armageddon before, and this seems like one of those times. We have all made it through each of the prior cases, and this time will be no different.

In my 26-year career, I have experienced several of these gut-wrenching declines. They never feel good and as the saying goes, it is always darkest before dawn. We do know that this too shall pass. I’m reminded of a quote from Sir John Templeton who famously said, “Bull markets are born on pessimism, grow on skepticism, mature on optimism, and die on euphoria.”

As always, we believe that the surest way for clients to achieve financial success is to remain focused on their long-term goals and objectives. Clark Capital is committed to helping you and your clients navigate these changing and challenging market conditions. Please reach out to us with any questions—we are here for you and with you, with the common goal of helping investors.

The views expressed are those of the author(s) and do not necessarily reflect the views of Clark Capital Management Group. The opinions referenced are as of the date of publication and are subject to change due to changes in the market or economic conditions and may not necessarily come to pass. There is no guarantee of the future performance of any Clark Capital investments portfolio. Material presented has been derived from sources considered to be reliable, but the accuracy and completeness cannot be guaranteed. Nothing herein should be construed as a solicitation, recommendation or an offer to buy, sell or hold any securities, other investments or to adopt any investment strategy or strategies. For educational use only. This information is not intended to serve as investment advice. This material is not intended to be relied upon as a forecast or research.
The MSCI World Index captures large and mid cap representation across 23 Developed Markets (DM) countries*. With 1,646 constituents,the index covers approximately 85% of the free float-adjusted market capitalization in each country.
The CBOE Volatility Index, known by its ticker symbol VIX, is a popular measure of the stock market’s expectation of volatility implied by S&P 500 index options.
This document may contain certain information that constitutes forward-looking statements which can be identified by the use of forward-looking terminology such as “may,” “expect,” “will,” “hope,” “forecast,” “intend,” “target,” “believe,” and/or comparable terminology (or the negative thereof). Forward looking statements cannot be guaranteed. No assurance, representation, or warranty is made by any person that any of Clark Capital’s assumptions, expectations, objectives, and/or goals will be achieved. Nothing contained in this document may be relied upon as a guarantee, promise, assurance, or representation as to the future.
Clark Capital Management Group, Inc. is an investment adviser registered with the U.S. Securities and Exchange Commission. Registration does not imply a certain level of skill or training. More information about Clark Capital’s advisory services and fees can be found in its Form ADV which is available upon request.
CCM-500