May 14, 2019 | The trade negotiations that were supposed to be going so smoothly suddenly erupted into a storm of tweets, threats, tariffs and retaliation. Global markets have borne the brunt of the trade tensions over the past few days, with the S&P 500 only off 4.45% from the record high set on April 30th. Even though the decline is modest, market pullback has accelerated as the trade war heats up.

The trade war continues to worsen, as both the U.S. and China raise tariffs and apply them to a broader range of goods. In addition, President Trump warned China not to retaliate against our tariff hikes. Thirty minutes later, China retaliated with their own new set of tariffs. There will be a short delay before they take effect, so an agreement is still possible, but the rhetoric is also hardening positions on both sides. This got serious very quickly, and both sides have potentially a lot to lose.

The equity markets responded quickly by pricing in new information upon the announcement of new tariffs. Trade uncertainty has been out there for a long time and the fact that relations have deteriorated is cause for the market’s concern. However, we believe the direct economic impact of the latest round of tariffs is relatively small. The U.S. hiked tariffs from 10% to 25% on $200 billion worth of goods— an increase of $30 billion, or 0.15% of GDP. China retaliated by increasing tariffs from 10% to 25% on $60 billion worth of goods. Below is a timeline leading up to these most recent increases: 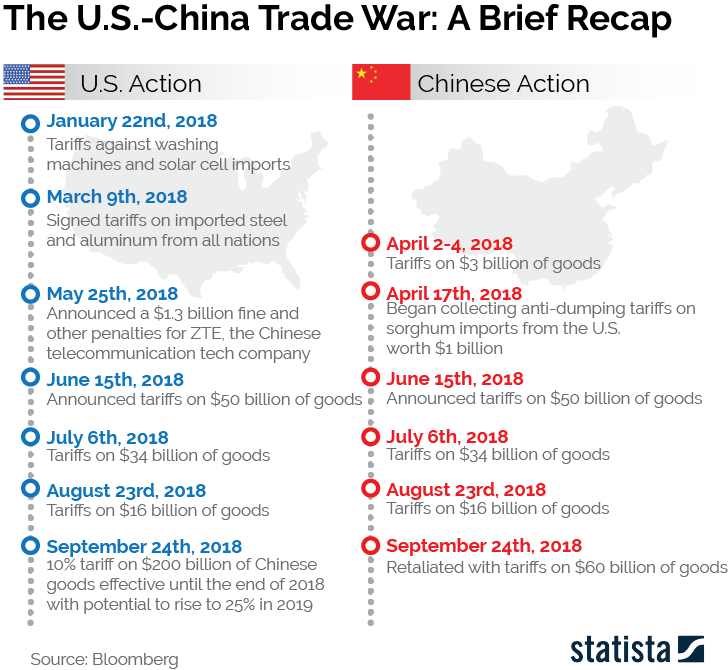 Should the Trump administration decide to levy tariffs against all Chinese imports, which is now being threatened after China retaliated by announcing plans to slap tariffs on U.S. goods, it would amount to another 0.4% hit to GDP. We believe that neither tariff hike would amount to a significant increase in recession probability. However, a more lasting impact that we have already witnessed is a reluctance of businesses to increase capital expenditures. The spike in policy uncertainty has already depressed business investment, and the longer the uncertainty, the more damage it will cause. As the trade war escalates, rate cuts become more likely. Right now, the Fed funds futures market is pricing in a 78% probability of at least one rate cut by the December FOMC meeting.

The next G20 Summit is scheduled for June 28-29 in Osaka, Japan where there is likely to be a meeting between Presidents Trump and Xi. This escalation is not likely to settle down immediately, but our opinion remains that a trade deal is the more likely solution for both sides to save face and avoid the negative political and economic consequences that would accompany it.

Importantly, trade talks continue, and it is clearly in both countries’ best interest to settle this dispute. We believe this trade-related weakness presents an opportunity to replant seeds into an oversold uptrend in the markets once volatility fades and short-term sentiment statistics start showing pessimistic extremes.

This information should not be considered financial advice or a recommendation to buy or sell a particular security. The opinions expressed are those of Clark Capital and are subject to change without notice. The opinions referenced are as of the date of publication and may not necessarily come to pass. Forward looking statements cannot be guaranteed. Clark Capital reserves the right to modify its current investment strategies and techniques based on changing market dynamics or client needs and there is no assurance that their assessment of investments will be accurate. Material presented has been derived from sources considered to be reliable, but the accuracy or completeness cannot be guaranteed. Clark Capital Management Group, Inc. is an investment adviser registered with the U.S. Securities and Exchange Commission. Registration does not imply a certain level of skill or training. More information about Clark Capital’s investment advisory services can be found in its Form ADV Part 2, which is available upon request. CCM-500